One of the things I love about 18th to early 19th Century British and American paintings is how they often had no clue what lions looked like. They only painted what they imagined lions appeared to be. This was in large part because they had never seen a lion before. The booming trade of exotic wildlife in London did not start until the early 19th Century, so the “Old Masters” had painted lions incorrectly. It was not until John Landseer opted to correct this fault in art that any realistic depiction of lions was made. John Landseer decided that the depiction of big cats by the Old Masters were bogus. He thought since the London Zoo now had real “big cats” he would make a comparison between the actual species and their pictured counterparts. In response, Landseer spearheaded a project which ‘corrected’ the Old Masters’ depiction of these animals.

Edward Hicks, a 19th Century Quaker painter, is an excellent example of the laughable problem of bogus looking lions in his work, The Peaceable Kingdom. Your eyes may be drawn to many things in the painting but who is not immediately attracted to the Jim Henson-esque looking long haired lion with a mouth full of straw. Clearly, the Old Masters influence his work. But what I also love about this artwork is how he is painting a world he does not yet see. This piece is based off of our text from Isaiah 11:1-10 where Isaiah himself is painting a world with words he also does not yet see. Edward Hicks makes his art a diptych between the Quaker mission and desire for peace with the Native Americans and the future reign of Christ on the earth. So also, Isaiah has made this section of scripture a diptych between the mission of God for the world and a desire for days of peace in the Messiah.

Isaiah 11:1-10 is a hinged pair of prophecies. Like a diptych painting, the panel on the left shows a young king who is strong and full of the Spirit, who practices justice and righteousness, with wisdom, understanding, and knowledge. Everyone who stands in opposition to him faces his wrath and any monarchs opposing him lie dead. Nearer to him though are the poor, those whose faces are lifted, and hearts rejoice. The panel on the right is a brilliant bestiary. There are multiple carnivores like the wolf, leopard, bear, and lion. He also includes many gentle herbivores such as the calf, lamb, ox, and goat as well. These predators and their delicious equivalents are all in fellowship together. In the center of it all a child presides over this kingdom of odd parings. Meanwhile, toddlers play by the nests of gentle cobras and adders. If this text were a painting we were to visit on display, there would likely be a little plaque next to this diptych with the title of Justice and Peace.

If you wanted, you could preach on one panel or the other; there certainly is enough there for two separate sermons. However, these two were purposefully and masterfully set side by side which allows us to let them inform each other. They enrich our devotion and give us an opportunity for the sermon to teach us what Advent means from Isaiah and for us. Namely, the Messiah has come to execute justice and righteousness and to bring creation back into order.

The Messiah has come to execute justice and righteousness and to bring creation back into order.

The coming of this king in Isaiah is unexpected, much like the second coming will happen suddenly and unexpectedly for the world. By this time in Isaiah the royal family tree was finished. The surprise in this text is that from this stump the king suddenly sprouts up and appears. This Davidic King is so different from all the others. Israel and Judah’s kings and our executives are not known for their reverence, wisdom, righteousness, and effectiveness in doing the right thing for others. We think a good leader looks like a person who is decisive, powerful, and good at making us money. However, Christ the King’s return will show us what we can only imagine. He will be a king and His a kingdom will be unlike any we have known. In Advent, we are waiting for the hope to be fulfilled for us. That hope was realized for Isaiah and God’s people in the first advent of Christ at Bethlehem and especially as they drew nearest to God’s promise fulfilled at Calvary and in the empty tomb.

This sermon is a good opportunity for the church to re-imagine with Isaiah the vision of the new creation in the Kingdom finally come. John Dillenberger states it well in his book, The Visual Arts and Christianity in America, saying:

“Imagine—baby goats are best friends with grizzlies; a lamb and a wolf enjoy conversing over a breakfast of clover. Imagining such unlikely friendships between ex-predators and prey invites a little fun, but we should guard against getting too cute. The text has its eye on the deadly aggressions and fears that sicken the world, the ending of which can be envisioned only in a far-future tense. A thoroughly healed creation is imagined, nothing less than Eden remade.”[1]

Trying to describe a heavenly vision which captures the unseen while still depicting the serious strain and tension in the world must have been difficult.

This tension between the unseen beauty and strife that still exists in this world reminds me of Edward Hicks. In his painting of Isaiah’s vision, he tries with great difficulty to capture the true “Peaceable Kingdom.” He struggled as he painted and repainted this one vision at least sixty-two times. Each time he painted it all the animals are there, and a child among them, and in the background a delegation of Quakers in peaceful conversation with some Native Americans. But each time he repainted it he made the dangerous parts of the painting more realistic.[2] Hicks inspiration was his frustration with the lack of progress for peace with the Native Americans. Like his art, it was difficult and slow moving. He hoped for the future day which seemed so distant. Like Isaiah, Hicks longed for the promised arrival of the Messiah which would come with the return of Jesus. We know this frustration as well. We look around in the world and want to repaint it again and again until we see the peace of Christ’s Kingdom come for real. We hope in the future day of Christ’s second coming which will bring the Kingdom of God fully realized for all time.

What I love best about Hicks’s painting is the look of shocked surprise the lion has on his face as a “little child” is presiding over all of this. Isaiah’s “little child” is the gospel surprise that leads us to the center of our proclamation. The irony in Isaiah is instead of the expected fully-grown veteran leader, we unexpectedly have a “child” who seems so vulnerable like the calf, lamb, kid, ox, or toddlers playing around the snake’s den. How is this child able to lead the whole “bleating, mooing, yipping, snuffling, roaring, giggling company”?[3] Because He is the one through whom “all things were made, and without him was not anything made that was made” (John 1:23).

This Messiah truly did come as a child but that did not prevent him from being the lamb of God and the lion of Judah. In Christ is both full humanity and full divinity. In the two natures of Christ, He meets our vulnerability and yet retains divine strength. This is the perfect opportunity to unfold the theological confession of the two natures of Christ in a sermon. Of course, this was present in His first Advent. So, those who need a Christmas fix “out of season” can have it here. More appropriately though, the two natures in Christ are also present in His second Advent as He is still the resurrected God-Man even today! In this Christ comes a halting of aggression and a banishing of fear because He is the justice of God and the peace of God.

In this Christ comes a halting of aggression and a banishing of fear because He is the justice of God and the peace of God.

One day our eyes will see the Kingdom come. Until then, we can only imagine what it might look like. As we imagine His Kingdom realized our minds are filled with our best attempts to understand. Like Edward Hicks, we long for that Kingdom to come and bring Justice and Peace today. When Christ returns, He will correct our vision of what our hearts only hoped for. This corrected vision will certainly bring with it a surprise and beauty which will transform everything. I think of John Landseer’s corrected vision of the lion which “was published in 1823 as Twenty Engravings of Lions, Tigers, Panthers and Leopards, a handbook intended for lovers of art and animals.”[4]

Almost forty years after John Landseer started his project to bring “realistic portrayal of lions to the art community,” his younger brother, Edwin Landseer, who was heavily involved in his brother’s work:

(Edwin) “...shocked audiences at the Royal Academy when he exhibited a stark, life-size, oil painting of a dead, slumped lion. In the painting, he has returned the animal to the wild. But for his audience there was no mistaking it. The lion was fully recognizable as the familiar animal who had died at the London Zoo. Initially, given the title The Desert, it came to be known as A Fallen Monarch.”[5]

What made this work so compelling is that it was unrealistic to get up close to the lions while they were alive to paint them. They had to wait until they died to get close enough to give a realistic portrayal of the kings of the jungle. So now that he could get near, he would paint the lion as he really was. 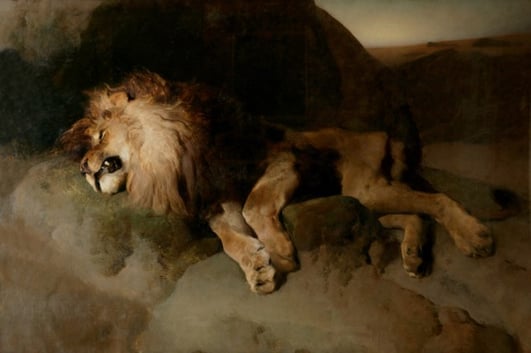 Approximately seven hundred years after Isaiah spoke this prophecy, the death of Jesus gives us the opportunity to draw close to the Messiah, so close that we can see God’s grace in full detail. In the death of Jesus, we get the real-life portrayal of what peace with God for us would cost. The Messiah only became fully recognizable to His created people in His death and resurrection. When God displayed His Son for all to see, it was the fulfillment of the prophecy of Isaiah’s suffering servant. It was also the realistic picture of what Messiah was for the entire world. Now we wait in expectant hope for the full realization of this word from God for us. It will be the day when Christ comes and there will be peace and justice, where the lion and the lamb lay down together. Here again, we have a two-part picture of salvation: The reality of strife now with the world but also the future Kingdom coming which Isaiah sees and Revelation lays before us. It is the culmination of all things where “the lamb who was slain reigns” (Revelation 5:12; 13:8) in His Peaceable Kingdom forever.

Craft of Preaching-Check out our previous articles on Isaiah 11:1-10.

Text Week-A treasury of resources from various traditions to help you preach 11:1-10.

Lectionary Podcast- Rev. Roger Mullet of Concordia Theological Seminary in Ft. Wayne, IN walks us through 11:1-10.